Normally I associate France with warm weather and sunshine, whereas the UK is the dull wet and cold country. Not this time! 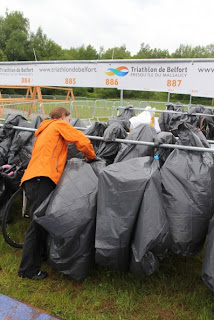 The weather had been so cold that the swim was cancelled so the long distance triathlon turned into a duathlon. It's years since I had raced a run-bike-run duathlon. The last one I did was in the Phoenix Park in Dublin about 5 years ago. I now had to figure out how to pace a duathlon, what items to put in each transition bag to have ready for the right part of the race and also what to wear as it had been reported to be as low as 2 degrees on top of the 1200m climb, Ballon d'Alsace. 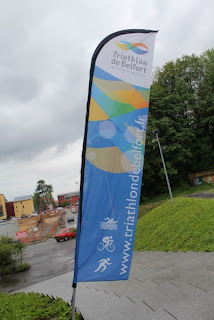 I set off on the run not really knowing how to pace it. I started off fairly near the front as the route was quite narrow the whole way around. They weren't expecting to have to set off 100+ runners at a time. I settled into an easy running pace and managed the first 9.5km run in 42:02. After a quick stop in the changing tent to put on a windproof layer and long fingered gloves, and run through the mud in transition, I was out on the 87km bike course.

The bike course was fantastic but would have been even better in some sunshine. Instead, we got mist at the top obscuring the views. I headed up the climb at a steady pace, trying to pace it on feel even though I had a power meter on my bike. I'm still getting used to cycling with power data and I just wanted to have the data there for post-race analysis. I found that I was steadily passing people on the climb, more than were passing me. I had no idea where I was in relation to any of the girls but I was catching a few of them and even catching some of the men in the earlier waves. 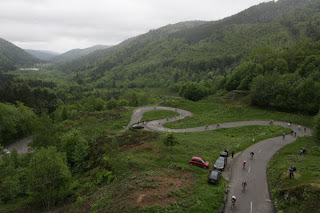 I kept to a non-solid diet for the whole of the race, mainly scoffing Torq gels (rhubarb and custard flavour - yum!) and some Cliff shots, along with water and energy drink. I previously had difficulty digesting solid bars on the bike so I avoided them this time. The descent from Ballon d'Alsace was great, with about 7 switchbacks. I realised that if I pedalled out of the corners, I could make up time and even pass people. It was great to pass people on the descent as usually I find lots of people whizzing past me while I'm hanging on the brakes all the way down. This gave me a great confidence boost!

I got into transition after 3:09:18 on the bike. I always like getting into transition and running past people with my bike. I think that transitions are generally relatively quick for me, just rack the bike, change shoes and put helmet and jacket into the transition bag. 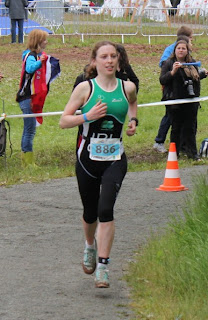 Out on the run and I then realised that my legs were a little tired. This time we had 2 laps to do for a total of 20km. The run was mainly on trail with 2 hills on each lap. I knew the course by now, having ran most of a lap in the first run. Even though my pace was quite a bit slower this time, I was still steadily progressing up the field. I had a bit of a dip in my speed at the start of the 2nd lap and had to fight hard to pick the pace up again. One last gel helped, mentally as well as giving me a bit more energy in my legs. My run time was 1:36:00 for a total finish time of 5:34:55.

The post-race provisions were excellent, with a buffet of snacks laid out for all the racers. They even had hot soup to warm us up! I met up with Paul, a fellow Manchester Triathlon Club racer (for GB) and we both got massages from local physiotherapy students. I did try out my French at this stage to learn the French words for some muscles - I hope she didn't think I was quizzing her too much!

When I finally got back to the car after collection all my kit, I checked my phone to find a message from Greg stating that the internet said I got 3rd in my age group. I couldn't believe it and went back straight away to check the official results. He was right, I managed to win a bronze medal at World Championships! 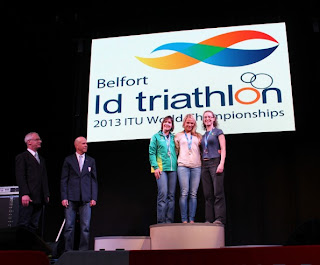 Thanks go to Dad who was there to act as chauffeur and photographer for the weekend. He even managed to sneak into the VIP tent long enough to get some refreshments. 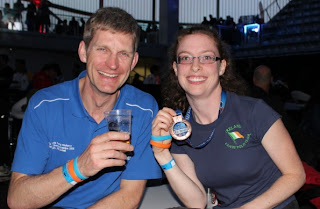 We were both pretty happy with the results of our race, I got a bronze medal, while Paul got a beer! 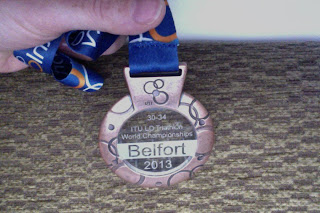 The result of the last few months of hard work! Thanks also to coach Tony, maybe he can help me to more success in the future.
Posted by Pauline at 11:57